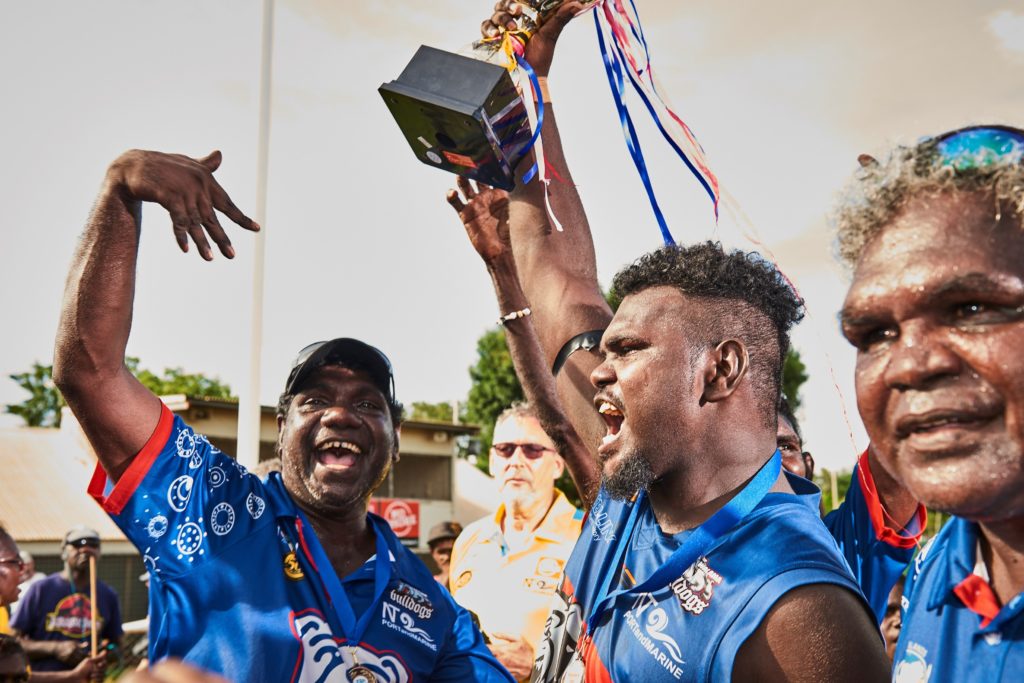 On the Tiwi Islands, Australian rules football isn’t just a game – it’s a way of life. The Tiwis’ love of the game is legendary, and the islands of Bathurst and Melville, located 80 kilometres north of Darwin, have produced some of the most gifted football players Australia has ever seen, including Maurice Rioli, Dean Rioli, Austin Wonaeamirri, Cyril Rioli, and Anthony McDonald-Tipungwuti.

The Tiwi Islands Football League (TIFL) comprises eight locally based teams who compete during the wet season months of October to March. The season culminates with an annual grand final and art festival which is arguably the biggest event in the Tiwi Islands calendar.

“It’s a huge day for us”, explained Dean Rioli, former Essendon Bombers player and current President of the Tiwi Islands Football League. “Pretty much everyone from the Island attends the grand final. The standard of footy is as exciting as you’ll see anywhere, and you’ve never seen a crowd as passionate. It’s something very special.”

The importance of football to the Tiwi community isn’t just measured by on-field success and the talent of its players. In many ways, winning is secondary to the true impact that the sport has had on the local community. According to Dean Rioli, the impacts have been life-changing in ways that are almost impossible to measure. “Football brings a sense of purpose to Tiwis. It creates structure, community engagement, and community spirit. It’s something all Tiwis feel part of. You can’t overstate just how important it is for the Islands and our society. It’s what brings us together, and it’s literally saved lives.”

It’s the opportunity to support Tiwi people and their passion for football that has inspired NT Port and Marine (NTPM) to become involved with the Tiwi Islands Football League as its principal sponsor.

“We’ve sponsored the league for three years now, and it’s fabulous to be able to support such a fundamental part of Tiwi life”, Lindsay Whiting, Port Manager at NTPM said. “NTPM and the wider AusGroup team are really proud of the impact we’ve had on the Islands, and we’re looking forward to continuing our support in the future.”

NTPM is part of the AusGroup family, and the TIFL sponsorship is an example of AusGroup’s wider commitment to Indigenous engagement and opportunity.

“We’re very proud of the initiatives contained in the AusGroup RAP. It’s really important for us to contribute in meaningful ways to the societies and the places where we do business, and the Tiwi Islands and its people are a huge part of NTPM”, explained Lindsay. “It’s been really rewarding to see the positive impact that football has had on the Islands, knowing that we’ve played some role in helping that to happen. We do genuinely see our support as a way to give back to the community in the most meaningful way we can.”

NTPM and the Tiwi Islands

The port has played an important role in supporting the local Tiwi economy which to date has exported around thirty-five thousand tonnes of woodchips, and which in July this year will export its nineteenth shipment of the product. The port employs approximately 12 people including local Tiwis – this number is expected to grow as local industry itself grows.

“The Tiwi forestry project is delivering real benefits to the community in the form of commercial opportunity and local jobs”, said Lindsay. “Our wharf facilities and fueling station are helping this growing industry, which at the moment is diversifying from woodchips for pulp to woodchips for biofuel – this is a real opportunity for the Tiwi Islands and for local Tiwis.”

Support to the local community extends beyond financial contributions – NTPM’s facilities include a laydown area and an accommodation village, and at various times its facilities have been used by Tiwis to support a range of activities and logistics.

“Last year there was the real possibility of a COVID-19 situation developing on the Islands and we quickly worked with the local police force to develop solutions to help protect the local community. This would have seen our facilities converted to provide suitable accommodation to support isolation and social distancing. Luckily this wasn’t needed, but we remain ready to help out where we can in the future”, Lindsay explained.

NTPM supports the local Tiwi community because it genuinely sees itself as being part of that community. “There have been times when we’ve helped with the logistics for ceremonies on the Islands – providing transport, docking sites and shaded marquees for example. We’ve got the facilities here and are happy to help where we can”, Lindsay said. “The Tiwi community is part of us, and supporting them is too.”

There’s still more that can be done, Lindsay acknowledged, and AusGroup and NTPM are committed through wider reconciliation initiatives to continue the positive journey to reconciliation that is underway.

As football is plays such an important part to the lives of Tiwis, renewal of NTPM’s sponsorship is a valuable step.

The Tiwi Bombers are looking for membership support of the club. Go to tiwibombers.com for more info.